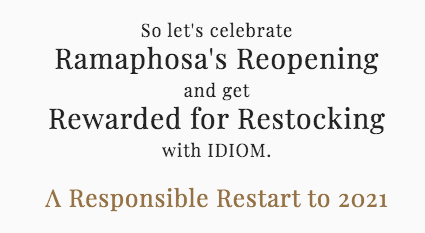 FEBRUARY IS A MONTH WITH 2 R’s

So let’s celebrate
Ramaphosa’s Reopening
and get
Rewarded for Restocking
with IDIOM.
A Responsible Restart to 2021

While 2020 was meant to be a leap year to start off the new decade,
for many of us it felt like a lost year, despite the extra day.
We have all followed the political and social media debates
regarding the need to balance lives and livelihoods.
On a personal level, some of us have become ill and recovered,
while others are mourning the loss of loved ones.
In the economy, some sectors were able to zoom ahead at warp speed
but many others were literally held back in a time warp,
often under lock and key.

Wine and hospitality were two sectors that were particularly hard hit
by the effects of the pandemic.

After a January that felt like it belonged in 2020, we googled ‘February’
in search of an uplifting message for this newsletter.

We discovered some interesting facts about the 2nd month of the year:
– ‘February’ has 2 r’s close together but many people drop the first ‘r’,
to make a sound similar to ‘January’, a pronunciation phenomenon known as dissimilation which often occurs with liquid consonants.

– The name derives from the Latin februum which means “purification”
after the purification ritual held during this time in the old Lunar Roman Calendar.

– Under reforms instituted in the Julian calendar and then slightly modified in the Gregorian calendar, February always became the 2nd month in the calendar year when all twelve months were displayed in order, with 28 days in common years and 29 days in leap years.

– Once every six years and twice every eleven years consecutively,
February has four full 7-day weeks,
where February 1st is a Monday and the 28th is a Sunday.
2021 is one such year!
A sign to reset and refocus?

With these thoughts in mind that some order may finally be returning to the world,
we celebrate President Ramaphosa’s Reopening message on 1 Feb and thank the stars – beaches and wine are no longer on the forbidden fruits list.

SO NOW THAT IT IS LEGAL AGAIN,
WE’RE OFFERING SOME REWARDS
FOR RESTOCKING YOUR FAVOURITE IDIOM WINES

To find out more about the rewards offers and to continue the story, click here: February 2021 Newsletter

← PREVIOUS NEXT →
BACK TO NEWS & EVENTS