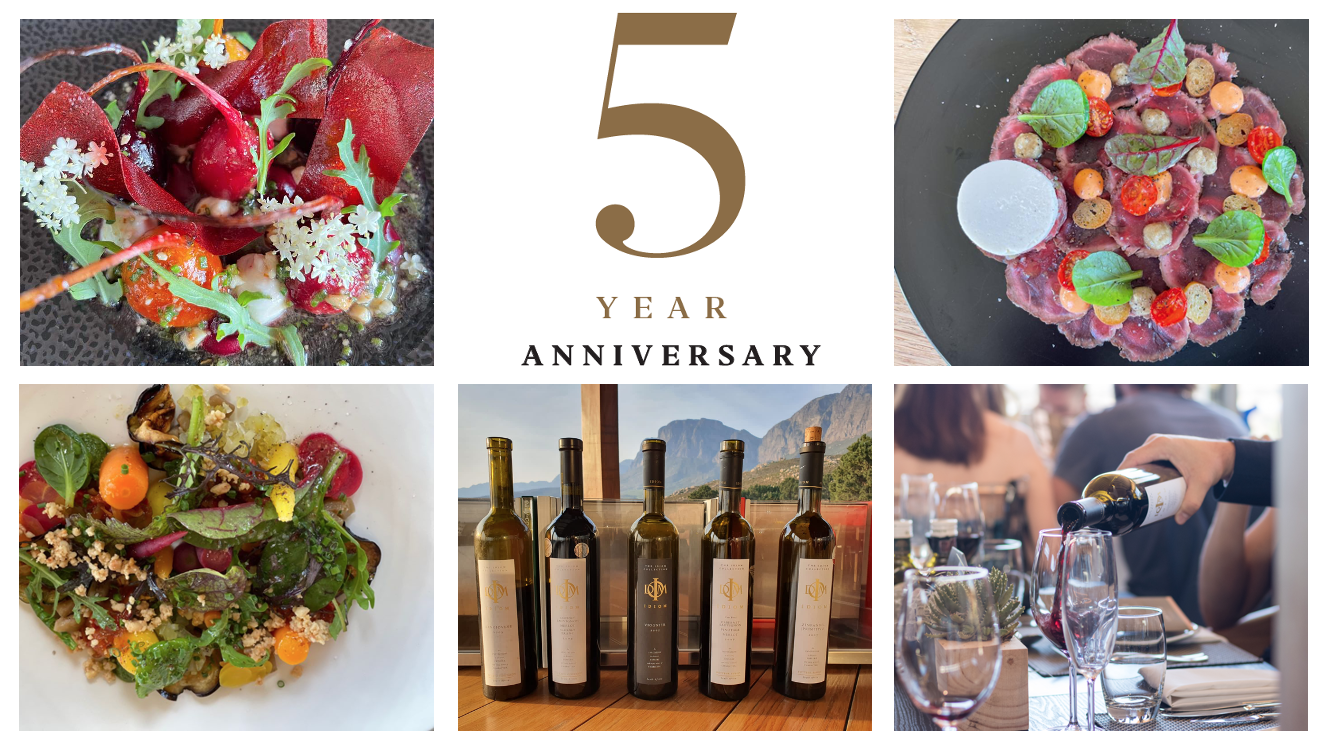 Celebrating 5 years of culinary experiences at the
Idiom restaurant and tasting centre.

On Wednesday 16th and Saturday 19th June 2021, Idiom celebrated the 5th Anniversary of the opening of its Wine Tasting Centre and Restaurant. The event was held over two days to comply with Covid regulations. On the Saturday in particular, winter paused and the weather was absolutely sublime – warm with blue skies and not a breath of wind. The Cape Peninsula and Helderberg mountains were visible in all their glory to the naked eye – ‘8K’ high definition stuff and one of the clearest days ever at Idiom. Guests applauded in agreement when they heard that the Idiom Restaurant has received an award for ‘Best View on the African Continent’ in late 2020 from the prestigious World Luxury Awards.

The theme for the day was the number 5.

It started with an exclusive midday guided tasting of 5 Idiom vinoteque wines, presented outside under the stone arches by Idiom owner, Roberto Bottega. Roberto explored 5 signature Idiom wines, each with a special story that represented a defining moment in Idiom’s wine journey. These wines were selected from the first 5 years of Idiom’s production, meaning that guests were treated to a very special tasting of wines that ranged from 14-18 years old. The lineup included:
– the inaugural 2003 ‘goosebump’ vintage of Sangiovese, which secured the services of consultant Giorgio Dalla Cia,
– the 2004 Cabernet-Sauvignon driven flagship Bordeaux-style Blend which was awarded Idiom’s first Double Gold medal and a place on SAA’s First Class wine list,
– the 2005 Viognier, the wine that gave a customer ‘a near religious experience!’,
– the 2006 Cape Blend, Idiom’s ‘proudly South African’ wine made with Pinotage,
– and last, but not least, the 2007 Zinfandel/Primitivo, Idiom’s consistently ‘wow’ and ‘delicious’ wine with its unique revolving tray of rosemary, bayleaf, sage and mint flavours – possibly one of Idiom’s best food-pairing wines.

The majority of the wines were still in excellent condition and surprised with their freshness and texture, while some showed wonderful complexity from bottle age. Idiom’s sommeliers were given the task of writing an up-to-date tasting note for each wine to see how the wines had evolved from the description crafted at the time of bottling. Idiom’s wines do seem to be able to age very gracefully, one of the most important characteristics for making a wine brand investment-worthy.

After the tasting, the guests were then treated to a 5-Course gourmet dining experience prepared by the talented Idiom Chef team, featuring some of the best dishes from the first 5 years of Idiom’s menus. Couples and groups could elect to share both the regular and vegetarian/vegan friendly selection, effectively doubling the 5-course experience to a ten-taste treat! Each dish also had a recommended pairing of current release wines for guests that wanted the Full Monty!

Roberto also gave guests a heads up of some important new wines that Idiom will be launching in the second half of 2020 – including its very first Right Bank style Merlot-led Bordeaux Blend – possibly every bit as good – if not better – than its Left Bank style releases – and that special events will be held to celebrate these new wines.

All-in-all, another outstanding and memorable day was had by everyone. Thank you to all who attended.

Idiom will be communicating the dates of these Do-Not-Miss new release events in future newsletters.

It’s not often that you get the opportunity to try wines that are between 12 and 15 years old… When you do find yourself in possession of those types of wines, they are most likely going to be kept for a special occasion – one of those special occasions that just never seem to come.

And when you finally gathered the courage to open such a wine, then comes the mulling of thoughts about the possible faults that may have occurred with the wine or the cork. Getting past that fear and at last opening a lovely, aged wine, excitedly pouring it into a glass and catching a whiff of a glorious aroma – that’s when you know it was all worth it. A bottle that has aged beyond its original description at the back of the bottle – what a rebel you are for cellaring it beyond its “5-year ageing recommendation”.

Such was the glorious tasting that was held at the Idiom Restaurant and Tasting Centre’s 5-year anniversary – led by proprietor Roberto Bottega.

Right out the gate, the first vintage of 2003 Idiom Sangiovese showed an explosion of sour cherries followed by the soft structure nursed by age, accompanied by tertiary flavours of wet soil and mushrooms.

Then came the 2004 Bordeaux-style blend, consisting of 56% Cabernet Sauvignon, 28% Merlot, and 16% Cabernet Franc. Still as intact as ever, staying true to the original flavours yet tertiary notes once again took the initiative to be the leading component on the palate. Refined? It certainly was!

To give the palate a bit of a cleanse before going forward, a taste of the 2005 Idiom Viognier was served. A wine that is no longer in its prime, but nonetheless an experience in its own right, giving insight into the evolution of white wine varietals. It retained a round balance through its years with some of the typical Viognier glycerol elements still present as you swirled it in your mouth, joined with a basket of cooked fruits and honey with some typical by-product flavours, such as paraffin-like notes, one can find in aged white wines.

The inaugural Idiom Cape blend followed. The 2006 vintage was initially created to bring to life the South African heritage of the Da Capo Vineyards, with a makeup of 46% Cabernet Sauvignon, 36% Pinotage, 10% Merlot and 6% Petit Verdot. Once again, just like the Bordeaux?style blend, the Cape blend retained all of its original characteristics – cloves, almonds, black cherries and cacao, interestingly similar to the components of a black forest cake.

Lastly, this iconic tasting experience finished with the 2007 Idiom Zinfandel, a new beginning winemaker, Reino Thiart, who made his first wines at Idiom in 2007. To prove himself, he achieved a high level of extraction from the grapes during pressing, which definitely helped the wine to be so compact 14 years later. Lovely dark fruits were alluded to, especially with the intensity of the minty and herbaceous flavours many people have come to love from Idiom’s very terroir-expressive example of a Primitivo.

Make sure not to miss out on any future events by signing up to our newsletter:
SIGN UP

← PREVIOUS NEXT →
BACK TO NEWS & EVENTS